I can’t find much more about 2003, at least in the digital archives I still have a pile of old Courriers (the Triumph Sports Six Club magazine) to go through.

This is what a later version of my site said about 2003 :

2003 was a good season for us, spoiled only by one dubious scrutineering decision at Mallory park. This meant we had to miss one more race than planned and never quite managed to catch up with eventually class and Championship winner Barry Blakely. Still, a 2nd in Class, 3 lap records and 3rd Overall in the TSSC Championship was a very welcome result.

Below is the TSSC points table for the top 6 drivers of the 2003 Season.

The “dubious scrutineering” decision cost me at least 2nd place overall and possibly a championship win.  It did seem a strange decision, essentially I was excluded from a meeting because of a small rust hole in the boot floor (actually where the boot floor meets the curved rear panel at the bottom).  It’s something we still talk about today 🙂  I know that letters were written to the MSA in my defence afterwards (not by me), but unfortunately there’s not much they could do after the fact.

Here’s what Jon Wolfe said about it at the time :

The only other real point of note was the most bizarre scrutineering decision I have ever seen. Richard King’s Class A Spitfire was excluded from the meeting for being structurally unsound. The grounds were a tiny (by which I mean about 4mm) rust hole in the corner of the boot floor and a small patch of rust near the front of the driver’s foot well. I, or any other driver, could have found plenty of far worse cars in the paddock without too much difficulty; Richard’s is in fact one of the strongest Spitfires racing as it has a full steel body shell with all its steel inner panels intact too! Most Spitfires have fibre glass rear wings held on with a dozen or so pop rivets, no inner boot panels and aluminium or glass fibre floors and rear panels.  If you could choose which Spitfire to crash in, it would be Richard’s. The scrutineer also refused to be specific about which parts of the car he felt were unsafe and told Richard that no repair undertaken that day would be acceptable!! How can that be right!? Although Richard got a full refund, a lot of people were very upset by the decision.

There was also a nasty crash at Mallory that year in which John Thomasson lost control of his fast modified Spitfire on the exit of Gerrards and ended up in the tyre wall on the inside of the circuit, he was briefly knocked 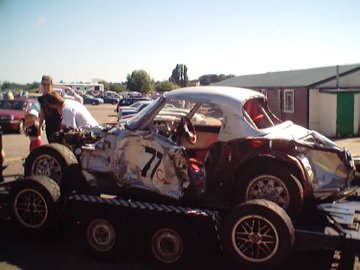 Jon Thomasson’s car after crashing at Mallory in 2003

unconscious and there were a few tense minutes spent standing on the bank with his young daughter.

The lesson I learned from this was that I needed to concentrate more on car preparation and safety. 15 years later the car now shines bright like a diamond and has all the modern safety features and no rust anywhere.

It’s still basically the same as in described in Jons’ quote though, most of the steel rear-inner panels are still in place (for now).   I had always said that I’d replace the rear end with “fibreglass and a dozen or so pop-rivets” when it needed doing (i.e. after the current set up gets damaged in an accident) but so far I have never needed to. 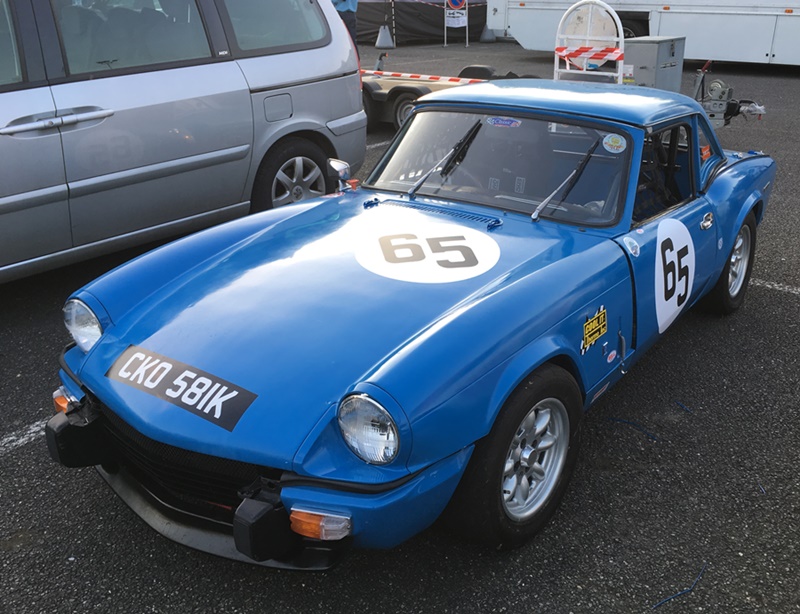 The car as it looks now