I’ve asploded all over the internets!!11

Notes from the future : There’s a big gap between 2005 and here, I did some racing in 2006 and then in 2007 we moved to France.  I then started rebuilding the cars (which took a long time) and adjusting to my new surroundings.  I went to Spa pretty much every year to help out Jon Wolfe and the gang and occasionally at the Nurburgring and other European circuits.  I also took part in a two driver race at the Spa Summer classic in which we won the class, but more on that later…

Before I start ‘blogging’ again, I thought I ought to tie up some loose ends.

Firstly, I let the domain richyrichracing.com lapse and now it’s owned by some nifty registrar company who want a $1,000 for it or something (good luck with that).

I’m going to sort out something else, not sure what yet. Perhaps a .fr as I’m now living in France but in the meantime this is all you get 🙂

Secondly, RichyRichRacing has had about 3 or 4 sites and blogs now and quite a few of them are still kicking around. If you’re interested in the history of all this try the following :  [Only the livejournal link still works as of Dec 2018, all the content has been reproduced on this site anyway]

Will we ever see an all singing, all dancing RichyRichRacing ‘web site’ again? I don’t know, but it’s more likely that I’ll use this blog to pull together different sources (photos on flickr, videos on youtube etc.) There are other plans, but I’m not promising anything because then I’ll only feel all obligated to do it and it’s the sense of obligation that grinds you down, isn’t it 😉

As for me, my absence is due to having completely moved my entire life over to France. I never really planned it, it just sort of happened. However, things have settled down now and it’s time to fire up my engine and do some racing again.

First thing though is to rebuild the car, which I’m planning to document here. I’m also rebuilding my wife’s TR2, I might document that a bit as well. Should be fun! 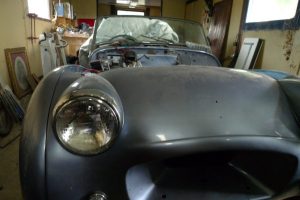