Notes from the future : So wow, it looks like my bog standard, high mileage, unmodified (aside carbs/manifolds and well setup), large crank 1300 Triumph Spitfire engine made it this far! Six races.. before it wrecked it’s bottom end and even that looks like it’s because it overheated.  I’m actually surprised, really surprised.  I mean OK I wasn’t the fastest car out there, but I was out there and actually racing!

On the Saturday the circuit was shortened due to a lack of marshals. Lincolnshire being Lincolnshire, the harvest season had caused many of the available helpers to be recalled back to digging up potatoes and what have you.

Then, in morning practice I managed to break one of my drive shafts, fortunately this didn’t cause a spectacular incident but meant that I had so spend the rest of the session “on the bank”. However, the marshals were very pleasant and as usual did an excellent job of clearing me out of the way for the next session.

Back in the paddock, I managed to source a spare drive shaft from Andy Vowell (what a nice fellow he is) unfortunately it was for the wrong side, but a bit of jigging by Mark Field (Jigsaw Racing) saw me back out for the championship race.

This is possibly where things started going really wrong. The car ran fine for the first few laps or so, and as usual the class A order was Russell, Kev then me. But soon I felt I was loosing power, and I could certainly see that I was loosing ground. I finished the race, but wasn’t entirely happy. The wheel attached to the new shaft had also worked it’s way loose and was wobbling dangerously towards the end of the race.

Back in the paddock, I could see that the car had overheated quite drastically, but so had everyone elses. On closer inspection I saw that I’d lost my radiator bottle and drained about half of the water from the engine onto the track. It also turned out that the thermostat had jammed…

Thermostat removed, I went out for the all-comers race, but only lasted a couple of laps before the engine gave way entirely and became a rattling bag of spanners. That was effectively the end of my weekend…. My first DNF *Sniff*

Very despondent, I elected to stay overnight and drink beer. Quite a few cars retired that day. 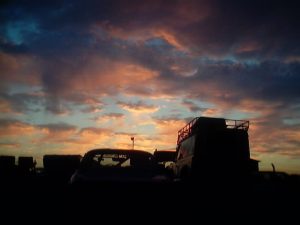 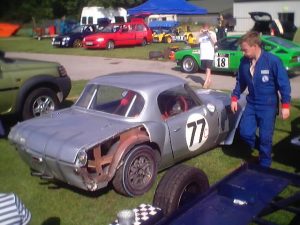 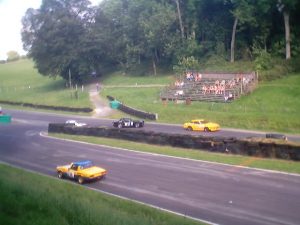 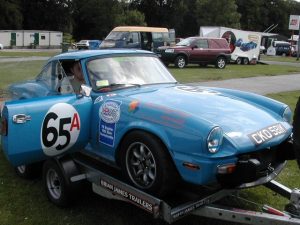