If you’ve been following along you will already know that I’m restoring all the old content of my site. I’m currently at the end of the 2002 season and I thought it might be interesting to write a new post reflecting on all the archived stuff I’ve found (and lost).

For me the biggest find was the video footage of the Thruxton start, it’s miserably low quality by modern standards but it captures quite a lot of the general ambience of these meetings.  Before I started racing I spoke to Richard Bull and he described the championship as ‘brutal’, he wasn’t wrong. 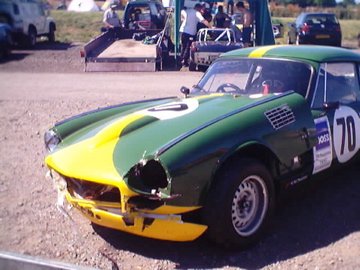 For context (and at the risk of upsetting Triumph fans everywhere), in the year 2002 small Triumphs like the Spitfire or GT6 and the later TR’s weren’t really all that classic.

Certainly very few people treated them as such.

The last Triumph Spitfire rolled off the production line in late 1980, so these were only 20 year old cars at that point.

In 2018 the equivalent would be racing something like an MX-5, a BMW Z3 or an MG-F. Nice little sports cars that you can pick up cheaply second hand and get bolt on go-faster bits and spares from numerous suppliers and/or scrap yards.

So, smashing them up a bit wasn’t that big of a deal and most of the cars looked pretty tatty close up.  Karl’s GT6 as pictured was actually one of the nicer looking cars from this era, but it shows fairly typical battle scars from the TSSC/TRR championship.  Driving standards will come up later I’m certain of this, one year I made a t-shirt about it.

Below is a list of all registered entrants for the TSSC part of the TRR/TSSC championship 2002. The X denoted novice drivers (not yet completed 10 races).  I’m still in touch with quite a few of these people, around 10 of them are still competing and 4 (including me) still in small Triumphs.

I’ve kept the number 65 ever since too and still use it when possible when competing in e.g. Legendary Circuits events, if you’re in the UK and interested in competing in a small Triumph car the Classic Sports Car Club Swinging 60’s series is probably the way to go.

I think at the end of 2002 I ended up 3rd in class, or last depending on how you look at it…  I improved on this a lot and one year nearly won the championship overall on points.

Class A (Roadsports up to 2 litres)

Class C (Tuned up to 2 litres)