I thought I was having trouble tracking down race reports, but it seems I only completed three races and only wrote about two.

2004, what can I say? Started the season in storming style with a class win at Silverstone and an extremely rapid qualifying session at Rockingham that put me right up amongst the class C (modified) cars. Then it all went wrong…
Firstly, I quit my job to take on a contract in France – which fell through. ‘Oh well!’, I thought, ‘let’s go to the Le Mans 24hr instead.’ – but the Land Rover had other ideas and wrecked itself on the way there. By this point I was pretty much penniless as my ‘slush fund’ had just been spent on a Land Rover engine rebuild, so I opted to sit the rest of the year out having completed only 3 races.

It was interesting that I was trying to find (or was at least offered) a contract in France, I hadn’t remembered this.  3 years later we end up moving to France and now, more recently, to Luxembourg.

The Land Rover broke its timing belt which completely knackered the top end and it took something like three months before it was back on the road.

I remember being very quick at Rockingham, some of the Class C (modified) cars were upset as I was still running in the road sports class and shouldn’t be going as quickly as them, at least in theory. Obviously there were thinly veiled threats of protest and some gnashing of teeth.  There were a few instances of cheating in the road sports class, I honestly wasn’t one of them though.. 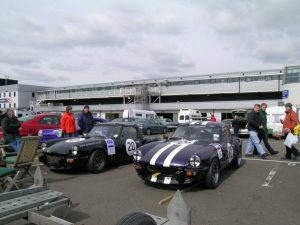 John Yarnell and Mark Hadfield’s cars. Some of the class A competition from the 2004 era.