After a long (6 1/2 hour) drive up on Friday night we awoke to a damp and windy Croft circuit. There was, unusually, no rushing around this morning – even though I had to attend a drivers briefing, having never driven at Croft before – as the timetable was very spaced out. Practise last thing on Saturday morning and the race almost last on Sunday!

We went out for practise on a dry(ish) track and I began to get to grips with Croft as a circuit. It’s a very challenging and quite long circuit, but it’s great fun to drive and requires a lot of nerve building up to taking certain corners flat and leaving braking as late as possible after impossibly long seeming straights.

I didn’t feel like I’d qualified brilliantly, after a near collision with Steve Crane as he was passing me in his V8 I found myself stuck behind a TR7 for the last half of the session, which was quick on the straights and slower than I’d have liked on the corners. I know I should have just dropped back half a lap or so, but I wasn’t thinking about qualifying and tried instead to get past… This easily made (and daft) mistake allowed both Barry and Mark Hadfield to qualify infront of me, Barry by just under a second and Mark by 3/10ths thereby putting me third in class A, ahead of Mik who is still taking it steady with his new engine, but is already going much faster than he was at Silverstone. 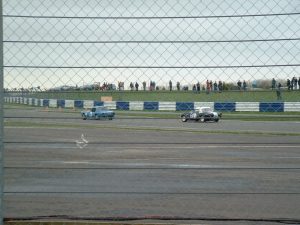 Being chased by Barry Blakely

Then followed 24 hours of hanging about. A few of the others decided to go to the seaside, Barry and Stella went on some sort of National Heritage rampage and Mik and I rattled about the paddock and occasionally watched some racing.

Saturday evening was notable for the big barbeque, which included much beer and some sausages. The highlight of the evening being Jon Wolfe’s impromptu chainsaw ballet, which took place around 11pm – much to the rest of the paddocks chagrin I’m sure – the results of which at least kept the fire going for another hour or so.

Sunday afternoon eventually turned up and everyone felt refreshed after sleeping in (why get up?). The race started with a bit of excitement as Steve Chapman failed to move off the line, holding Barry and Mark back. Mik and I saw our opportunity and I went into the lead. Mark and Barry managed to get past Mik but were then held up by the TR7 I was battling with the day before.

I tried to sieze my chance and build up a lead, but both Barry and then Mark both got past.
I could see Barry gaining on me as the race went on and I wished very hard for the last lap board or chequered flag. Alas, it wasn’t to be and before I knew it Barry was upon me (his blue and white bonnet being simultaneously the best and worst thing to see in my mirrors), he nipped past after getting a better run out of Hawthorn and it was all I could do to keep up with him for the last two laps before the flag.

Mark Hadfield finished shortly behind, but significantly ahead of the 3.5 litre Tr7 and Mik, unfortunately suffered a broken waterpump, which flew apart and dinged his radiator – this boiled his engine in short form and left him stranded on the infield chatting with the Marshals.

Class C was won by Karl Dandridge followed by Dave Thompson and then Kev Hadfield, who must by now have the fastest Triumph Herald in christendom.