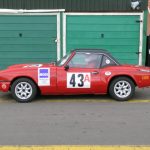 Notes from the future : Not much to add here.  Mik Davies and his car still around somewhere, I don’t think he’s raced it for a while.

After qualifying nearly 2 seconds behind Barry Blakely in the wet due to my inability to complete a lap without spinning off into the grass, we managed a class win in the race proper.

For the race it was apparent that the track was drying, so, after some tinkering with the tyre pressures I went out for the race. I needed to make a good start as there were 3 cars on the grid between Barry and myself, fortunately I did and by Copse corner Barry and I were side by side. He had the advantage into the first corner and for the first half of the race, but eventually I managed to out-brake him into Copse and nip past. Then followed some very hairy laps of nerve testing late braking into Maggots and slidey, sideways derring-do around Luffield. Fortunately, at some point, the V8’s came round to lap us and forced a gap to open between Barry and myself after which it was a question of not falling off or making any stupid mistakes before the chequered flag, or so I thought… I hadn’t banked on a 6 car sandwich going through Woodcote on the final lap. Thankfully we all got through and I took home my first class winning trophy of the season.

Other class A related points of note were Mark Hadfield who was following closely behind making sure that neither of us could make any mistakes and Mik Davis who turned up in his beautifully prepared racer and finished his first race with no major (or minor) incidents.

On top of all that, it was good to be back in the paddock with everyone – drinking beer and talking nonsense. As Andy Vowell said, ‘It’s a bit like going back to school after half-term, isn’t it?’ Quite so.