I went down to watch today, as I couldn’t afford an extra race this early in the season. I’m very glad I did, there was some spectacular racing but more on this later.

The first thing we noticed on pulling into the paddock was Kev and Barry had both their cars on their trailers. ‘Perhaps we’ve missed it’, said Carol. Unfortunately, both cars had been disallowed to enter after failing scrutineering. Both cars had welds in their front roll-bar hoops and after a particularly nasty accident there a few weeks ago where a front hoop snapped at a weld the scrutineers were very hot on this. I know from experience how gutting it is when something like that happens, I just hope both Kev and Barry can get the cars sorted in time for Rockingham…

Practise for all the races was fairly uneventful, although as the day went on the weather changed from bright and sunny to heavily overcast and torrential rain. Fortunately the Triumphs -Andy Vowell, John Lowe and Nigel Gibbins had a dry practise and from the looks of things Andy was going quicker than the BMW’s that the race had been amalgamated with.

Sure enough, Andy had qualified on Pole for the race and was quite excited, just behind him was a green MG that I hadn’t noticed previously, John Lowe was on the next row back and Nig a couple of rows behind him. And the race was to take place in a downpour…

Andy took the lead shortly after the start and held it, whilst under great pressure from a pursuing BMW, for a lap or two and then….SPAN dramatically, but fairly slowly without hitting anything and rejoined in 9th. Obviously this did something to motivate Andy as he then put in the most spirited charge I think I have ever seen and slowly, car by car, clawed his way back up to second and then on the penultimate lap passed the leading car to take the lead albeit briefly, but for the most important bit (i.e. the end). John seemed to be on the pace as well and didn’t appear to lose any places and for the first half of the race Nigel was slowly reeling him in – until going headfirst into the tyres (at least this time no major damage was caused).

So congratulations to Andy on his first outright win and bringing back some of the spirit of 1966 by beating all the German machinery my grandad fought so hard to keep off our racetracks etc. etc.

Thanks to John and Nigel (and Canley and SEMSEC) for organising the day, hopefully I’ll have a bit more cash in the bank in order to enter next time. 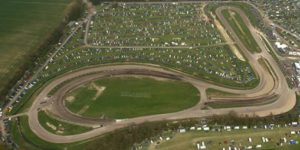