Back to a 1300cc Triumph Spitfire Engine

Since the engine blow up at Zandvoort, I needed to quickly get the car back on the track (actually the road, as the next event is a hillclimb).

I decided also that, for the time being, I was going back to a 1300cc engine – preferably a small crank (MKIII) style block.  The main reasons for this are: a) I don’t have time before the next event to be futzing about trying to improve the oiling any more to the 1500 crank and b) the 1300 engine generally seems just as fast (if not faster), accelerates quicker and is less stressed at higher RPM.

You’ll find a lot of debate online about different Triumph engines, but the majority of it seems to come to the conclusion that the small crank 1300 is the better choice.

Since Zandvoort I’ve acquired both a small and a large crank block.  The small crank block is built up, so that’s going in first. 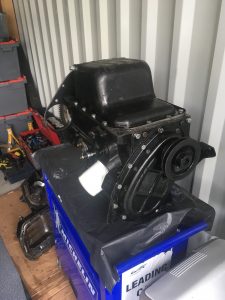 One minor problem with this plan was that I wanted to use my 1500 head as it’s had more development done to it than any of the 1300 cylinder heads that I have.  This meant that it would need quite a hefty skim…  After carefully cc’ing it – for this I used a piece of perspex, thin mineral oil and some medical syringes – I used the brilliant spreadsheet available on auskellian.com to work out exactly how much I’d need to have milled off to get the compression ratio up to the desired range.  I aim for a compression ratio of somewhere between 10.5 – 11 : 1 – this may seem high, but with the cam overlap it turns out about right.  10.5:1 is probably a reasonable maximum compression ratio for a non-race Triumph Spitfire road engine. 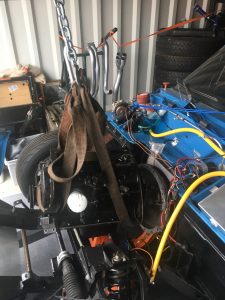 Fitting a Triumph Spitfire engine is something that you become used to if you race one, however it’s always a good feeling when it finally lines up and you can start bolting up the bell housing – which is a less good feeling as there are about eleven hundred bolts around it’s circumference.

Andy Vowell once told me he only used every other bell housing bolt to save weight, I’ll leave that here as a a weight saving tip – but I’m not sure I’d recommend it personally 🙂 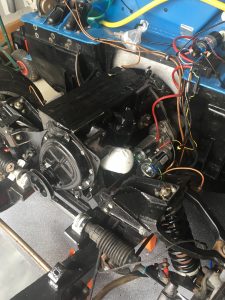 Once the engine was in place it was time to start futzing about with the ancillaries and setting it up.  The first job was to check and mark top dead center (TDC), this was done with my trusty dial gauge and some carefully applied yellow stickers. 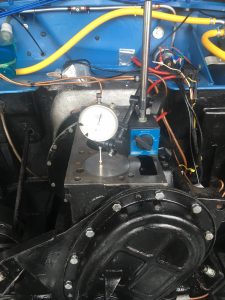 Using a dial gauge to check for TDC

Finding TDC on a Triumph Spitfire

I find the best way to check for top dead center (TDC) is to turn the engine clockwise until the number one piston is almost at the top of it’s bore.  Watch the gauge and keep turning until the gauge peaks and then drops to an easy to see reference point.  Stop turning and make a small mark on the front pulley, then rotate the engine anti-clockwise until the piston once again peaks and the gauge drops down to the same point.  Stop turning and make another small mark on the pulley.  The mid-way point between these two marks is TDC – so mark this clearly. 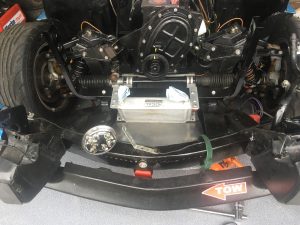 So that’s about where I left the car last weekend.  I now have just next weekend to get it ready for the Ballon d’Alsace and the job list seems to keep growing.

I also need to find a new alternator belt that fits as the 1300 engine has a smaller front pulley than the 1500.