It’s been very cold the last few weeks so progress has been slow.  However, it was also recently my birthday and I asked for (and received) a new starter motor.

The old starter motor had been on the car since it rolled off the production line in 1971 and has, to my knowledge, never even been serviced beyond being cleaned up with a wire brush and painted.

However, after nearly 50 years of sterling service it’s getting a bit wheezy and unreliable.   Turning over a high compression engine is a lot to ask of the poor thing and I have had difficulty starting the car in the assembly area a few times recently. At Angouleme I missed a session entirely as the car refused to start.

So, I asked Mrs RichyRichRacing for a WOSP high torque, gear reduction starter motor.  They’re great bits of kit, much lighter (about 1/2 the weight, I’d guess, sorry my garage scales ran out of batteries) and a bolt in replacement.

What’s more Luke and Richard Wos who run the company are both racers (see pic) and have been in the business a long time making these products in the UK. 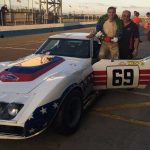 Fitting was very easy, the only difficult bit was deciding whether or not I wanted to keep my starter solenoid.  The WOSP starters have an on-board solenoid, meaning that they can be wired up to a permanent live and the starter switch directly.  In the end I left it with the solenoid in place for now as I built my custom wiring loom with that in mind, I may revisit this decision soon though.

Below is a picture of it in place, it’s just a shame it’s hidden from view. 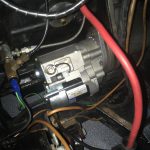 WOSP make these (and other products) to fit numerous vehicles, see the application list on their site.

Stockists include Auto Electric Supplies who are my go-to place for all electrical and wiring products.