Notes from the future : Stacky went on to be very fast indeed and ended up buying Kevin Ginger’s old Spitfire race car which made him go even faster, he hasn’t raced for a fair few years but is still very much involved crewing for Jon Wolf and Dave Thomson and occasionally myself.  John Yarnell switched to racing on foot but is still involved in the Triumph scene as the owner of JY Classics. Mark Hadfield upgraded (?) his Spitfire to a Ford Puma and raced that with the CSCC for a while, he took a few years out to produce baby Hadfields but I’m pretty sure he’ll be back.  I don’t know much about Anthony Preston.

I didn’t enter this race, too close to the track day and still too much to do to the car in order to make sure that it kicks the arses of certain Misters Hadfield and Stackpole…

But blimey, what a race. There was a most entertaining scrap for overall win between Jon Wolfe and ‘Mad’ Joe Henderson (won eventually by Joe Henderson, just). And plenty of shenanigans all down the field to make the entire 15 minutes thoroughly enjoyable.

From a class A point of view there were 4 cars entered. Stacky (Martin Stackpole), Hadfieldy (Mark Hadfield), Yarnelly (John Yarnell) and Prestoney (Anthony Preston). OK, I made 3 of those nicknames up – guess which ones.

John Yarnell had taken class pole, but it was Stacky who got the leap on the start and, wisely, got himself in front of Edwin’s TR2. Mark was next round the corner just behind the TR2, followed by John and then Anthony. Stacky seemed to pull out a clear lead while Mark was stuck fighting with Edwin and both John and Anthony suffered the spinning round problem that you occasionally get. NiG said this was from trying too hard, I think it was more likely going too fast for the amount of available grip 😉 However Silverstone, in my experience, always feels like they wash it with olive oil during the winter.

Martin managed to win by an almost 10 second margin, although it could have been very different as on about lap seven or eight he had a bit of a ‘moment’ exiting Copse which, if his car had carried on the way it wanted to, would have easily cost him his lead. He used some luck/skill/force or something similar and held his position heroically.

That was pretty much how it ended up. Stacky with another consecutive Class A win, then Mark, then John and Anthony.

I wished I could say something like, ‘Yeah, but if I was there it would be a different story…’ – but I can’t.

All three of Stacky, Mark and John are on the pace and John has claimed a NEW LAP RECORD! In fact it’s entirely probable – but I’m no statistician – that all 3 cars beat Barry’s previous record.

Just a quick congratulations to Anthony on completing his first race without any major mishaps and a warm welcome to class A. 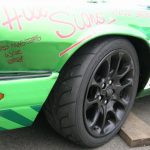 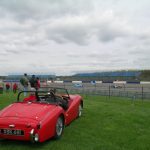 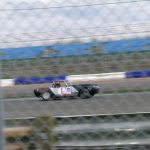 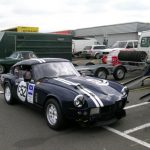 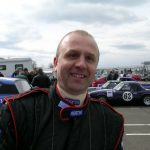 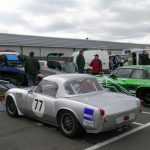 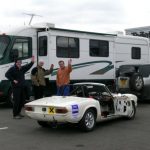 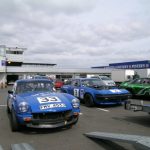