My Spitfire, like many racing and modified Spitfires is fitted with an electric water pump like this one pictured here. 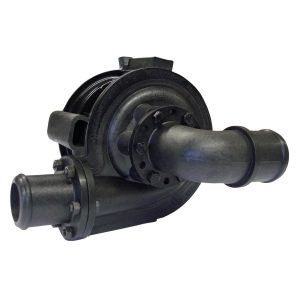 There are a couple of reasons why many people switched out their mechanical pump for an electric one:

Firstly – *MORE HORSEPOWER *  Probably not much more, but all the small gains eventually add up.  If you remove your water pump then the engine has one less thing to power.  The original impeller water pump is driven from the fan belt which in the standard configuration also drives the alternator and, perhaps unsurprisingly, the fan.

Secondly – improved cooling over the original set up.  When running at full tilt it sounds like a washing machine and if you open the radiator cap you can see the water sloshing around at a fair old rate of knots.  In fact, this is part of my problem and one of the things I’m looking at this winter is a way to prevent my Spitfire from running too cold.

Yep.. I noticed the car was running well below temperature at Pau this year but I put it down to the fact that it was not running well at all (one of the main jets was blocked so it was down on power).

However, I fixed the carbs and took it to a nearby circuit in France which was running a retro event (€20 for 20 minutes of track time is unbelievable – definitely going back) and it was still way too cold after 20 minutes of dicing and derring do with some Minis.

The problem with running an engine too cold is mainly that the oil is not getting up to temperature and oil is like Goldilocks’ porridge; too cold is not good and too hot is not good either – it has to be just right.

Too low a temperature also affects combustion efficiency but I’m more concerned about the oil.  I’ve wrecked and rebuilt enough engines over the years to not take chances with anything being at either extreme.

What I ideally want is something that will control the water pump to allow a rapid warm up and then mimic the operation of a mechanical thermostat i.e. not suddenly open the floodgates and bring the temperature crashing back down again violently then slam them shut again – let’s call this adjustable hysteresis (because that’s what it is called) and also optionally turn on the electric fan and more importantly the whole thing has to be override-able by me.  I don’t want to see the temperature gauge rising to dangerous levels with some ‘black box’ under the bonnet that may have gone haywire controlling the show.

And, whilst we are at it – it has to be light as a feather and cost about a fiver. Easy, right?

First off, I spent some time looking at what was on the market.  It turns out I didn’t spend much time, the cheapest thing I found was this at £40 but that’s still quite a lot for what looks like 2 relays and a thermostat. 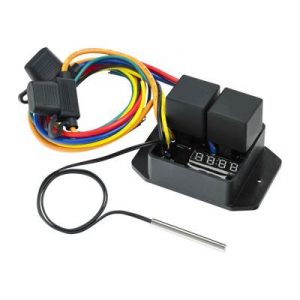 Then I found these 12V digital thermostatic controllers on a popular web auction site…. 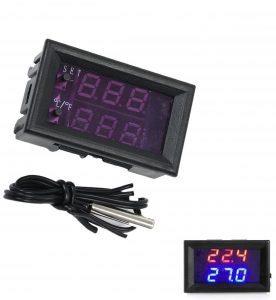 They are about £2 each (from China) with free postage and packaging – so I bought a handful.  Looking at it the sensor is the same as on the expensive one (not surprising, it’s a common waterproof thermistor – 3950 NTC), the usable temperature range is identical to the £40 unit and the digital display even looks similar.  The hysteresis is configurable and the settings are stored when it’s powered off.

There are some downsides though – of course there are, it costs £2…

The circuit design is questionable (but it works well enough in early tests), the soldering is poorly done, it’s not waterproof and lastly whilst it has it’s own in-built in relay rated for 20A @16VAC I wouldn’t risk running an 8 amp load through it (the pump is rated at 7.5A).

So it’ll need an extra external relay (let’s call this another £2 – but in reality free as I have loads in the garage) and a box to put it in, plus a bit of fiddling around to re-solder some of the components, make it water/shock proof and some wires.

Ok, I’ve blown way through my £5 budget when you add in wires and connectors etc. but it’s definitely going to cost less than £10.

If you just want a simple digital on/off thermostatic controller with adjustable hysteresis these (with the addition of a 12V relay) would probably do the job.

A better option might be a W1209 which has a more robust circuit design (but no case) – I bought a few of these as well at the same time but currently they’re stuck in the Christmas post.

In the next part of this post we’ll look at some options for wiring it all together and some fail-safe mechanisms.

I’m still experimenting with a few options to make the ultimate pump/fan controller so we’ll see where this ends up.