Notes from the future : So, 2004.  It looks like I got tired of updating my site, I redesigned it all and moved all the new race reports to a Live Journal blog and junked all of the old ones (the ones I could find I’ve already posted on this site).
I have no idea what happened to the engine I took out here, I wish I still had it…
Fitting FIA approved seats to a Triumph Spitfire is still a massive pain, it’s very difficult to find them with a small enough base and shoulder area, there are some more expensive slim ones now which may be better.
The Live Journal posts look much smaller and there are fewer pictures, so I’ll use these to post a bunch of random images from that time.

Not long to go now. Not long enough. I’m trying to paint the door, but am being hampered by the snow (what I wouldn’t give now for a garage).

Last years engine is out and safely tucked away, but removing it brought bad news. Turns out that the clutch is fine, this means that the transmission problems I was having last year at Brands must be either the gearbox or the diff, neither of which I had planned on replacing…Bugger!

Still, until I get a chance to investigate further I’ll just have to carry on with the more boring jobs, fitting the new seat, window nets and generally tidying things up in preparation for the season. 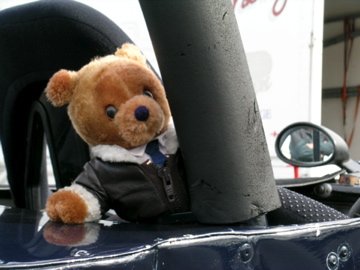