Notes from the future : I remember this being quite a lonely race, Thruxton is a power circuit and a road-engined Spitfire is probably not what you’d pick to win in here.  I’m having trouble tracking down images from this era, these are about right so they’ll have to do 🙂  Interestingly Russel Munns (who lends me an engine in this exciting episode) went on to race Mallock sports cars and became an ARDS racing driving instructor, you can see more about him and his activities on his company website Amberspeed.co.uk 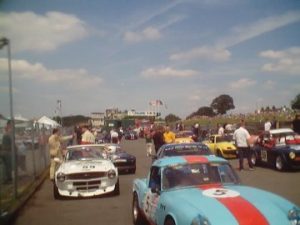 Well, I made it. I didn’t think I would, but Russell Munns had a spare 1300 engine that he said I could borrow if it meant that I’d get to race. I went and picked it up on the Tuesday night, went out for beers on Wednesday night and had a running car by Thursday night. It meant that I had to hire an engine crane, and spend most of Thursday daytime (which I took off work) under the car, but to my amazement the car fired up first time.

Thruxton is a very, very fast circuit (not ideal for Spitfires). And I was running as standard as they come (a bit like when I fist went out). An exciting spin through the complex slowed me down a touch in practice as well. I qualified last on the grid, as expected, but wasn’t too far behind the others, and a nose through the other races time sheets cheered me up a bit (if I was racing the frogeyes I’d have been in the middle of the grid).

The race, for me, was fairly uneventful. With no chance of catching Russell in his 1500 and no Kev, I basically set about enjoying myself and trying to improve my driving and with some success, I ended up three seconds a lap quicker than I had been in qualifying.

Other people seemed to have a better day though. Andy Vowell was awarded the Cambridge Motorsport Driver of the Day for his amazing battle with Paul Lucas. Paul took the win, but not without considerable pressure from Andy. Russell had a good race and took a new lap record for Class A, he also managed to get a faster lap time than Dave McDonalds Class B TR6. Way to go Russ.

The race for overall winner was between Graham Miller (TR7-V8), Richard Bull (TR5) and Simon Knowles (TR6), they finished in that order, but it was by all accounts a close and exciting race to watch.

Bizarre incident of the day award to Russell, who after the race discovered that his passenger footwell was full of oil, under the bonnet was even worse with oil everywhere. I noticed he was smoking a bit as we pulled into Parc Ferme. He is still investigating the cause, but hopefully it’s something minor and he’ll be back for Snetterton.

Malcom from the TR Register came to spectate again, he also popped by and said hello to us in the paddock. As at Mallory he used his photographic skills to good effect and put the results on his website.

Again, big thanks to all the Marshals and organisers for giving their time and effort so we can play racing cars. 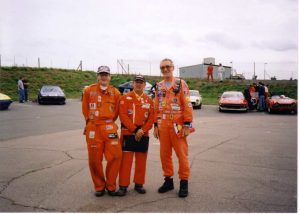 Notes from the future 2 : Astonishingly, I managed to find this video of the race start. It’s rather low quality, as was everything in 2002.., but has sound and gives some idea of what was going on.   Standing starts seem quite rare in historic events now, I miss them.