Notes from the future : I truly was microblogging in 2005, these posts don’t have much content but I’m reposting them here anyway for the archive.
I think short posts like this must have been an attempt to keep the site up-to-date.
Anyway, the picture is of a pre-grid lineup from around this era, the Vitesse Estate was called Silverback and was campaigned by John Davies for many years before it got wrecked (through no fault of John’s) at the Nurburgring.  The striped Spitfire was Mark Hadfield’s.

The car started! I’d like to say first time, but it was more like fourth of fifth and was having difficulty due to the cable to the starter motor being loose.

Even the lights worked!

I didn’t get to change the oil as I couldn’t find a new filter, pah! So I decided, instead, to focus on fitting the passenger seat, which went in relatively easily. I had to remove the ‘proper’ fire extinguisher and fit a small hand held jobby just for the track day, I’m hoping the process will be just as easily reversible when it’s time to go racing again. 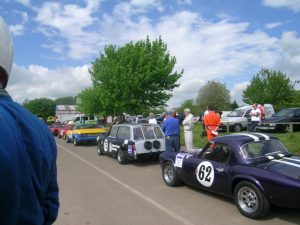