Notes from the future : My spidey senses are tingling and telling me that this is about the last thing I wrote in 2005..  I don’t remember doing a 2 driver race in Mik’s car, I’ll have to ask him about this and if it ever happened.

Well after another unspectacular engine blow up at Rockingham, I’ve decided to take a few weeks out and have a good, proper look at the car.

I’ll be taking part in the 2 driver race at Snetterton in Mik’s car, but mine probably won’t be back out until Silverstone now.

I did hear a rumour that it might be coming back out as a Class C (modified) car, but this is, as yet, unconfirmed… 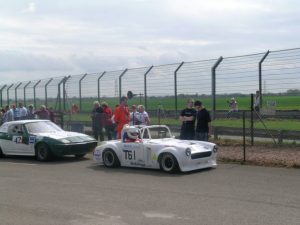 Photo from Castle Combe May 2005. The TR7V8 is Hugh Maund