Notes from the future : Ah, the joys of living in the UK.  I guess I got the Land Rover running again as I kept it until last year and did some pretty epic journeys in it.  None of this content has pictures, so here’s one of the Land Rover doing Land Rovery stuff. 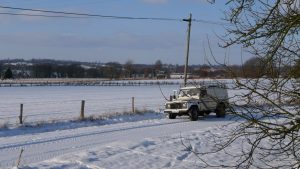 The RichyRichRacing Land Rover 110 in the snow

An annoying type of paranoia caused by opening one of the padlocks on your lockup only to have it fall to bits in your hand.

Evidently scallys with bolt cutters are at work in the area and according to local sources, ‘a few of the garages down here been done last week.’

Fortunately, for me, the double padlocking seemed to have done the trick. Bigger and better locks have been purchased and fitted and I’m checking the garage daily for signs of tampering, but so far it looks like they steamed in and opened the garages they could and probably won’t be back for a while. Still, better to be safe than sorry.

Other bad news is that I’ve not had time to look at the race car yet and the Land Rover has decided to not start. I think the latter is something to do with the cold weather, so I’ll be trying again tomorrow when I’ve got a bit more time.