Notes from the future : This post was written in 2000/2001 and is part of my ongoing project to restore the original content of this site.  Any information here is probably flat-out incorrect 🙂

Right, that’s all that out of the way.

On to the car.

As I covered earlier, it’s a Triumph Spitfire Mk IV. It was built in 1972 and is in what I would call (at least if I was trying to sell it) ‘tidy condition’. 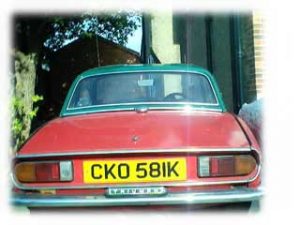 It has a 1300cc engine, which if modified would be a good thing. As it’s entering in class A (unmodified) I’m not so sure, but we’re just going to have to find out. Since writing this I’ve had a few emails on the subject, and the jury still seems to be out. The 1500 is doubtless more torquey and a wee bit more powerful, but it also seems to suffer from overheating and a tendency to chew through bearings.

To add fuel to the argument I had an email from a colleague of mine who also owns a spitfire. He says,

Top site! I like it.
Comments:
1. You spelt carbueratition wrong (I don’t know how to spell it either).
2. The ‘Body’ link on the Menu list jumps to the ‘Electrics’ page.
3. There are no pictures of my car, which is infinitely faster than yours. (and it has an MOT).

Well, here is a picture of Toby’s car. 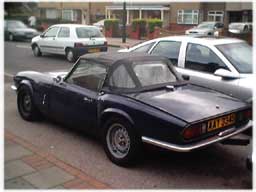 As for being ‘infinitely faster’ I’m not so sure, it’s a 1500 and true he’s lowered it and put fat tyres on, it’s got the sports exhaust and manifold and so on. But, I’ve been borrowing it to commute to work for the last week or so and I’m pretty sure my car could have given it a run for it’s money before I started on the racing modifications. It has been a while since I drove mine, so I could be thinking through rose coloured NHS specs… Time will tell I suppose.

As for carburettion, I’m 99% sure that I spell it correctly and the body link links to the body page (at least is does now…)

Going back to the 1300/1500 arguments, if it turns out that my car is so off the pace that it’s embarrassing (which I sincerely hope will not be the case) then I’ll consider the options again.