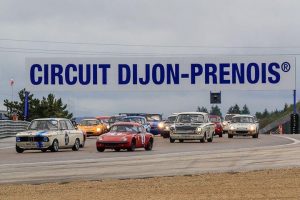 When not racing my own car I try to get along to any European races Jon Wolfe and/or Dave Thompson or Wolfitt Racing are doing and help them run their cars for the weekend.  There’s usually a few of us, but there’s always a lot to do as racing two cars usually means that one or the other will need some attention at some point.

They also race in the CSCC Swinging 60’s/Classic-K series, which generally consists of 40 minute pit-stop races.  The pit stops either involve a driver change or –  for single drivers – getting out of the car, closing the door and getting back in again and pit-lane assistance is usually required.

The CSCC tend to do one or two races ‘abroad’ (or local to me) every year – see their website Racing Abroad section – and last weekend they were at the fabulous Dijon-Prenois circuit for the Dijon Motors Cup.

This weekend was the first race Jon would be doing in his new Lotus Elan 26R so we were expecting to be kept busy.  For those that haven’t seen one close up, the Elan is basically a really, really good Spitfire.  Lightweight fibreglass body (so thin you can press it in with your finger), decent stiff chassis, adjustable wishbones and a 1500cc (nearly 1600) Ford cross-flow twin cam engine.

They’re very fast cars and you usually see them towards the front of most historic grids. 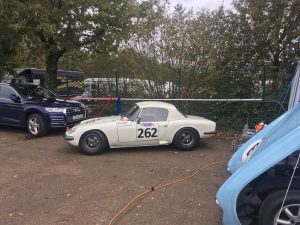 I arrived on Thursday after an approximately 3 hour drive to find Jon, Jared and Dave at the end of a huge line of camper vans and trailers waiting for the circuit gates to open.   Finally they did and everyone rushed in to get the ‘best’ spot in the paddock.

The best spot for us would be near some grass, as Jared and Dave were camping.  And Jared had only brought what was basically a child’s play tent with him by mistake.  He was already quite grumpy after having (not) slept in it the previous night on the way down and the prospect of (not) sleeping in it again in a stony paddock was worrying him a bit.  Bear Grylls he is not.

There was no grass to be found inside the fenced in paddock area, so he elected to sleep in a spare tent I had inside Jons covered trailer.   This arrangement would also be more agreeable for Lisa, his lady friend who would also be joining us for the weekend along with her best friend (and Jon’s wife) Noreen.  They had spent the previous evening living it up in Paris at the Moulin Rouge and were heading down to Dijon on the TGV.

With sleeping arrangements sorted we grabbed a couple of beers and set off to walk the track.  What a track it is, I am definitely pencilling in something here as soon as my car is back in action.  It’s like a mini-rollercoaster, absolutely all over the place.  I bet it is fantastic to drive. 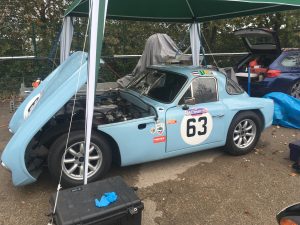 Dave’s TVR Grantura in the paddock at Dijon

Friday was scrutineering and a practise session, the former was quite brief but there was a small panic when they couldn’t find the FIA sticker on the Grantura’s seat.   It turned out to be in an impossible to see location by the transmission tunnel, luckily there was enough room to get a phone in and take a picture of the expiry date.

Both cars went well in qualifying despite the wet track.  The results sheet is shown below – the first, second and fourth place were taken by ‘modern’ cars that had been added to the grid from another race, it’s not usual to see a Vauxhall Astra in amongst the Classic-K grid 🙂 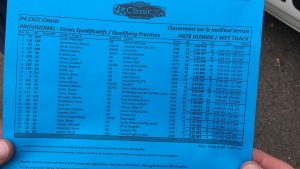 Overall and given the conditions Jon and Dave were quite happy with their positions and we set about dinner and apéros for the evening.  As there was no motorhome and everyone had decided to camp rather than book a hotel – a fact we were reminded of more than once by the ladies over the weekend – the back of Jon’s covered trailer was converted into a rather posh dining room/shelter.

No race weekend would be complete without some last minute fettling and Jon had decided to go all Uncle Bulgaria and make a diff cooler for his Lotus out of found items.  And, just like Uncle Bulgaria he didn’t actually do this himself, but sent of his team of wombles to look in bins and under hedges for old plastic bottles and bits of pipe which were taped together into a passable imitation of a Lotus 26R diff cooler. 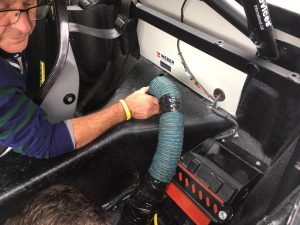 Luckily the bad weather held off for the Swinging 60’s race, in fact they were extremely lucky on both days not to have been racing in torrential rain.  However the track was still very damp and everyone seemed to be sliding all over the shop. 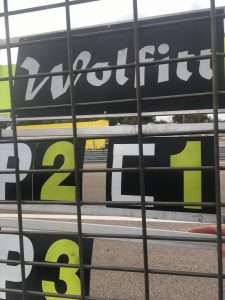 Standing on the pitwall was a cold and fairly miserable experience, although both cars seemed to be going well with Jon in 2nd place in the Classic K and Dave behind him in 3rd at one point.  The pitstops went swimmingly and in the end they finished one place down, Jon in 3rd and Dave in 4th (but importantly first in his class).  So both were happy, although due to some organisational mishap Jon wasn’t waved in for the podium ceremony, so a mini CSCC style celebratory podium would have to do. 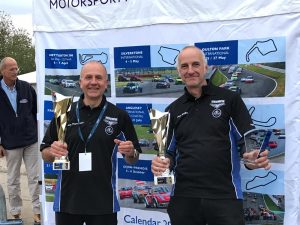 Dave and Jon collect their trophies from the CSCC

Saturday night was more of the usual beer, wine and tasty food served in the sumptuous dining room that was Jon’s trailer.

The weather for the Sunday race was worse than Saturdays.  It was drizzling and the track was much more damp and the timings and positions reflected this.  However thanks again to some awesome pit-stop action a class first for Dave and a class 2nd for Jon were reasonable results.  Dave seemed to be having some great scraps with the MG crowd, but unfortunately Jon spent most of the race driving round on his own.

Still both cars ran well and, I think, two class wins for the Grantura and two class seconds for the Lotus on its very first outing counts as a pretty decent weekends’ racing.

In Triumph Spitfire racing news, Steve Adams was there representing the marque, but unfortunately his weekend went from bad to worse.  Firstly, his new differential chewed some teeth off the crown wheel so he spent Friday evening replacing that resulting in cutting his head quite badly.  Finally, having got it all done his clutch went in the first race.  Disappointing weekend, but part of the joys of racing unfortunately.

Below, more pictures from the weekend. 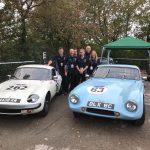 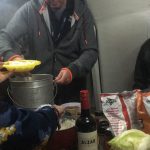 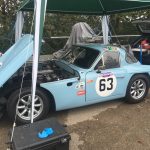 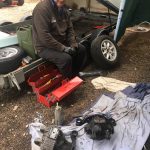 Steve changing the differential, horrible job to do in the garage.. never mind in the rain and mud 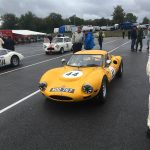